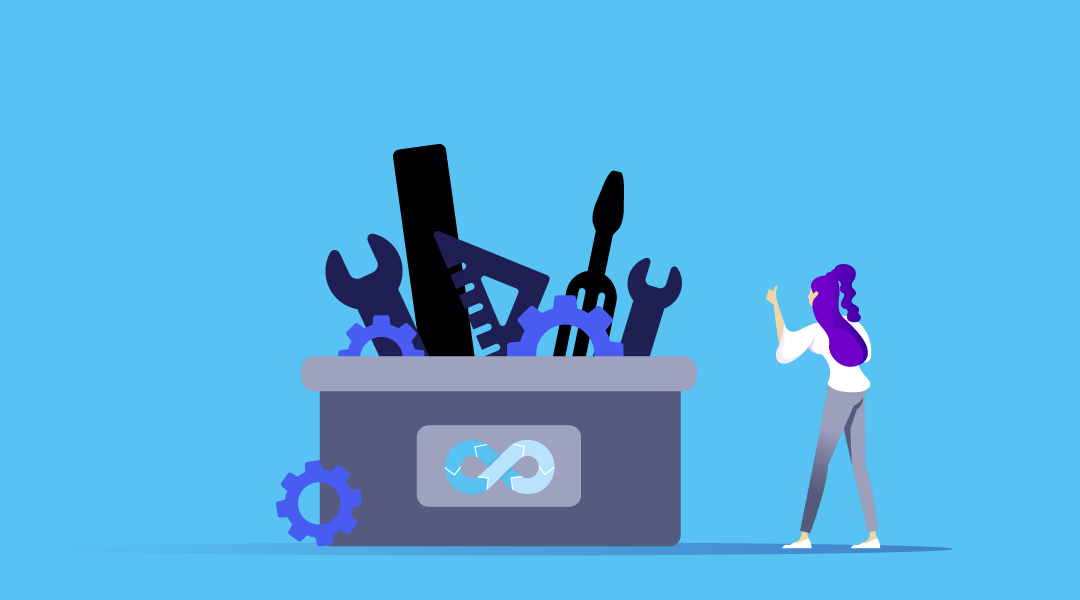 An oft-repeated adage in the industry is that “DevOps is a state of mind,” meaning it requires a culture shift within your organization towards blending the responsibilities of development and operations into one combined team. However, changing your business’s state of mind isn’t enough on its own—you also need a DevOps tool kit to support your transition. However, there are no one-size-fits-all solutions for DevOps, as your tool kit needs to support your specific goals, budget, and requirements. Instead of just focusing on individual tools and trying to rank them, let’s look at broader categories of DevOps tools and how they’ll help support you on your DevOps journey.

The following tools and best practices will help you create a framework for the successful implementation of the DevOps methodology.

Infrastructure as Code (IaC) is one of the fundamental principles of DevOps. IaC is the concept of managing your infrastructure configurations in the same way you do your software, by writing code that automatically configures servers and other networking devices.

Instead of manually configuring devices according to written documentation, or even running scripts to semi-automate certain configuration tasks, you write code that describes the desired state of the machine. Then, the code runs on the machine to bring it to the desired state—whether it’s by configuring a new device, applying patches and updates, or even rolling back changes. This means you can use infrastructure as code tools to apply core DevOps practices, like version control, virtualized tests, and continuous monitoring, to the creation and management of your infrastructure.

The specific IaC tools you use will depend on the target deployment—for example, AWS CloudFormation is designed only for AWS infrastructure, whereas a tool such as Terraform is cloud/on-prem independent, and can be used with VMWare, AWS, Azure, and GCP.

Many of the most popular code repositories with version control are based on the Git open-source standard, but may expand upon it with additional features like issue tracking, merge requests, access control, and even CI/CD capabilitiess. GitHub is a one-size-fits-most type of tool that’s favored by many developers, but you may find one that’s designed to work specifically with your platform (such as Azure DevOps) or that has certain features that fit your requirements better.

Continuous Integration (CI) and Continuous Deployment (CD) employ build servers, allowing teams to automate the creation of a software build, ensuring repeatable and consistent configurations. Build servers can also trigger builds for every new update that is pushed to the code repository, as well as run automated tests, which allows for continuous integration.

CI/CD also automates software deployment tasks. Deployment servers often work in conjunction with build servers and may be bundled together into a unified CI/CD server product. One popular example of this is Jenkins, an open-source CI/CD automation server. Build and deployment servers specifically, and CI/CD as a whole, support DevOps principles by allowing for greater automation of software builds, testing, and deployment.

CI/CD allows you to more easily implement test automation. This also allows you to integrate QA with the dev and ops functions of your DevOps teams, and helps you achieve greater speed and agility in the build and release cycle.

When you’re putting together your DevOps toolkit, you should favor tools with fully-featured APIs that are both automatable and customizable. This allows you to combine the capabilities of multiple specialized DevOps tools, rather than relying on one bloated tool that tries to do everything and consequently isn’t the best at anything. That way, you can ensure you’re always using the best tool for each specific DevOps task, and it’ll be easier to replace tools later on if a better option becomes available.

Virtual infrastructure gives organizations greater flexibility for handling resource-intensive workloads in a cost-efficient way. Projects can get started faster, because ops teams can quickly provision development environments without needing to purchase additional physical hardware. In addition, it’s easier to reallocate resources between virtual environments as needed for performance, and VMs can be moved between hosts for greater fault tolerance. This is why many DevOps teams use virtualization tools like VMWare, Amazon EC2, Azure, and VM for their infrastructure.

Containers virtualize the operating system kernel as well as the hardware. This allows you to create smaller and more concentrated payloads that can be deployed as an image on virtual infrastructure. Containers thus support DevOps by making it easier for developers to share their software and dependencies with ops teams. Tools like Docker allow you to easily build and run containers and related dependencies on a single node, whereas container orchestration tools like Kubernetes run across an entire cluster.

The fundamental goal of DevOps is to blend responsibility for development and operations into a single team; DevSecOps takes that a step further by making security a shared responsibility as well. DevOps environments present their own security challenges in addition to those already faced by IT teams, such as managing access controls across containers, automated deployments, and dynamically created infrastructure.

DevSecOps is mostly achieved through administrative policies and culture shifts, but you should also ensure your DevOps tools have security features (such as monitoring and logging, automated scanning and remediation, and visibility dashboards) baked in.

Developing the right DevOps tool kit can be incredibly difficult for organizations just beginning their DevOps journey. If you’re overwhelmed by all the options and don’t know which solutions are right for you, then you might want to consider partnering with an experienced DevOps team to help you select the right tools or develop a custom solution. That’s where Copado comes in.