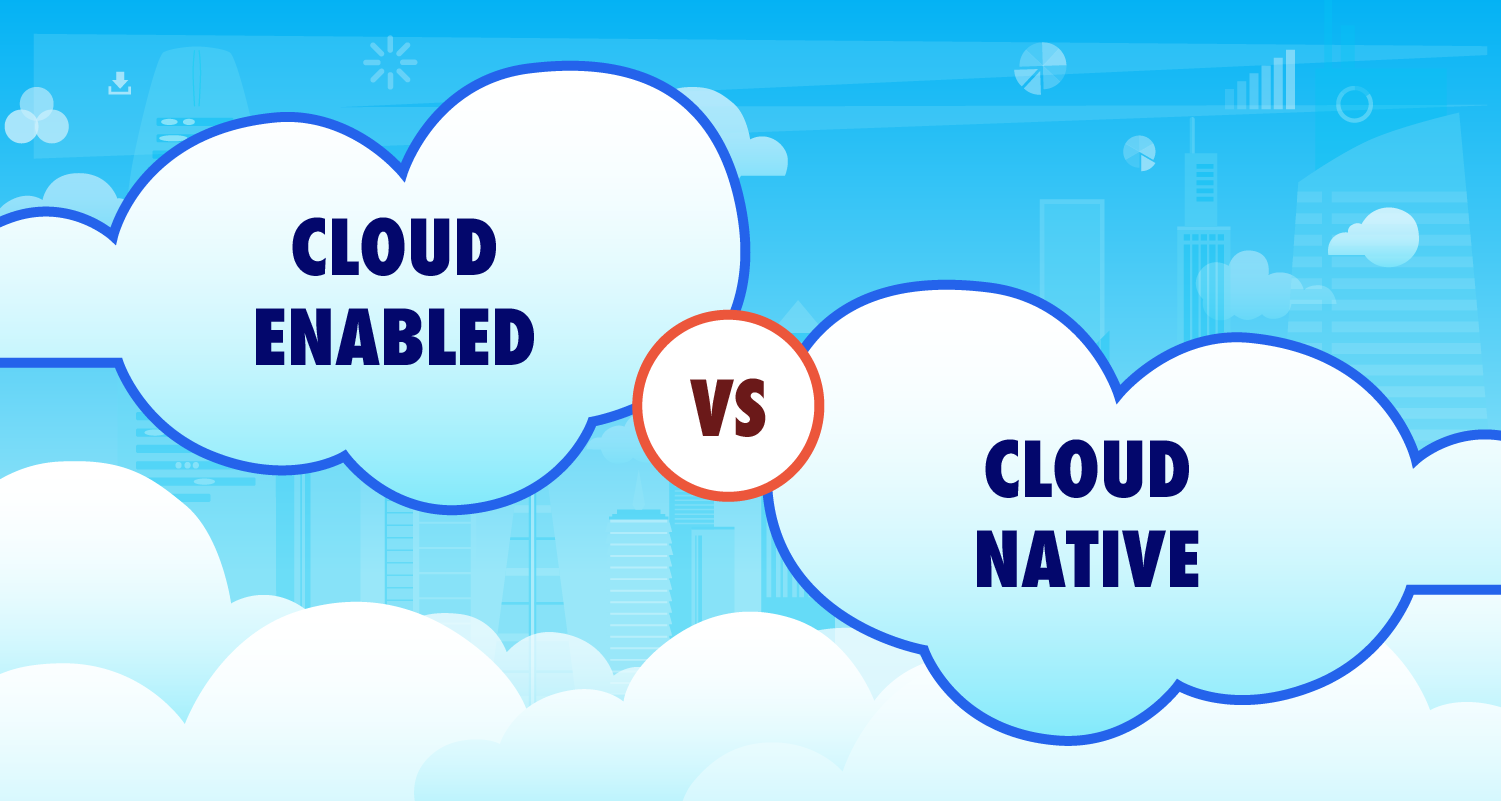 The cloud is critical to the success of the digital transformation. Practicing DevOps in the cloud allows for more flexibility and agility than in on-premises environments, which helps organizations streamline the SDLC and deliver better products. However, simply migrating traditional applications to a cloud infrastructure won’t provide the same benefits as developing for the cloud from the ground up. Here we’ll compare cloud enabled vs. cloud native applications and explain why the difference matters.

What Does Cloud Enabled Mean?

A cloud enabled application was originally designed for and deployed in a traditional data center environment. It’s usually a monolithic application, which means it is developed and deployed as a single complete unit. A cloud enabled application is also often dependent on local resources and hardware until it’s migrated to a public cloud. Typically, changes are made to the application to ensure compatibility with virtual hardware and cloud networking configurations, but the underlying architecture remains the same. The application is lifted and shifted from a data center to a public cloud infrastructure.

What Does Cloud Native Mean?

Cloud enabled applications and resources are not as easily scalable as cloud native.

A cloud enabled monolith application is designed to work on a single machine instance. If you want to scale, you must upgrade that machine’s storage capacity, compute power, RAM, etc. This process is known as scaling up, and it’s both time-consuming and expensive. Scaling down by removing resources is time-consuming and doesn’t offer any financial incentives beyond potentially recycling those resources for another system.

On the other hand, a cloud native microservices application is deployed to a cluster of machine instances with a shared pool of computing resources. More resources are added to that pool when demand increases — known as “scaling out.” This process is often handled automatically, but manual scaling is easily achieved through a few button presses and an agreement to increase the monthly bill. If demand decreases, reducing cloud native resources and lower costs is just as simple.

On that note, the costs of cloud enabled vs. cloud native applications are worth considering.

Cloud enabled applications can be more expensive to develop, migrate, and support for a few key reasons. First, cloud enabled applications are typically developed on or for on-premises infrastructure, which means investing in expensive hardware and software licensing. Modifying a monolith is much more challenging and time-consuming than adding or changing microservices. That means more development resources must be devoted to migrations, updates, and patches, which increases the cost of these changes.

By comparison, cloud native applications tend to be less expensive. As mentioned above, you can easily scale up and down, which means you’ll only pay for the resources you need at the moment. Since everything is developed in and for the cloud, you won’t need to purchase or maintain on-premises hardware and software. Finally, using a microservices architecture means that modifications are faster and easier, which allows you to cut back on development costs.

Since a cloud enabled application is more difficult to scale, it’s harder to respond to surges in demand. In addition, an application developed for on-premises infrastructure may not perform with peak efficiency in a cloud architecture. Plus, monolith applications are less resilient to failure because they’re deployed as one large codebase, meaning any defects or failures are likely to affect the entire application.

Cloud native resources can easily (and even automatically) scale-out as needed to meet spikes in demand and just as easily scale back in to save costs when the demand shrinks. A microservices application deployed to a cloud native architecture is also designed to use cloud resources as efficiently as possible, ensuring peak performance. Finally, cloud native applications are more reliable because the containers and microservices they’re deployed on can each work independently, meaning a failed pod can be terminated and recreated without eradicating the rest of the cluster.

Cloud native application development allows your organization to unlock the full benefits of a cloud architecture. However, it’s important to acknowledge that developing for microservices and containers can be difficult for traditional coders who are used to on-premises environments. That’s why providing adequate support for your development resources is important as you transition to a cloud native approach. Using outside help to train and guide your developers through their first cloud native development projects may be helpful. For example, the DevOps experts at Copado Strategic Services can shepherd your organization through the transition to cloud native development.